Review of the Gillio Giramondo, plus giveaway and discount

Today I have a review you are going to want to read. Gillio’s new Giramondo notebook cover has been hotly anticipated and I’ve got one. After the review, I’ll give details of a giveaway for one lucky reader (yes, you can own this review Giramondo) and a substantial discount for everyone else.

It looked fairly unprepossessing. A surprisingly heavy, dull-coloured box emerged from its cocoon of careful packaging. It had the kind of gravitas that requires one to take a deep breath before venturing further to lift the lid. 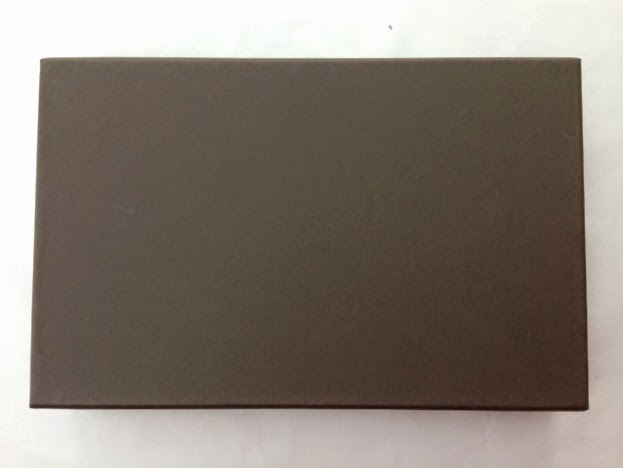 But open it I did, to find a further layer of protection, a brown protective pouch with the famous logo and slogan in gold. 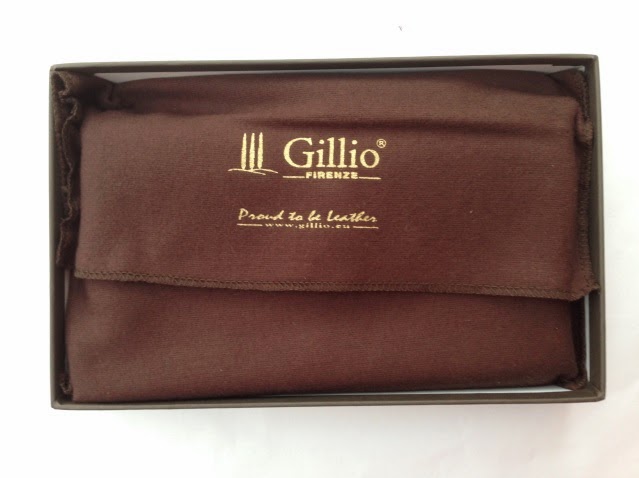 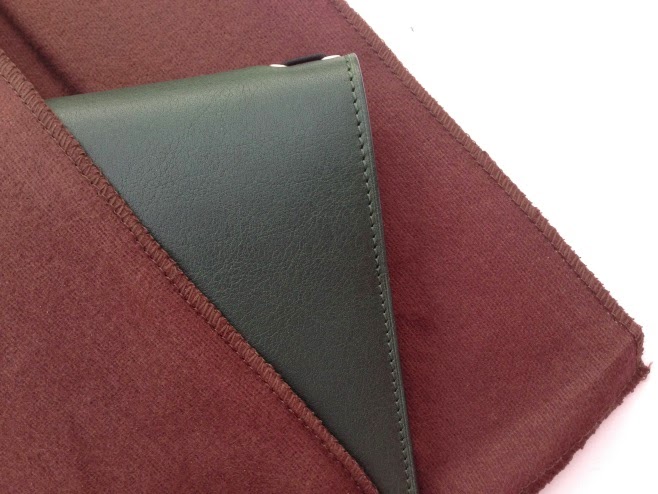 Enough teasing. Here it is. 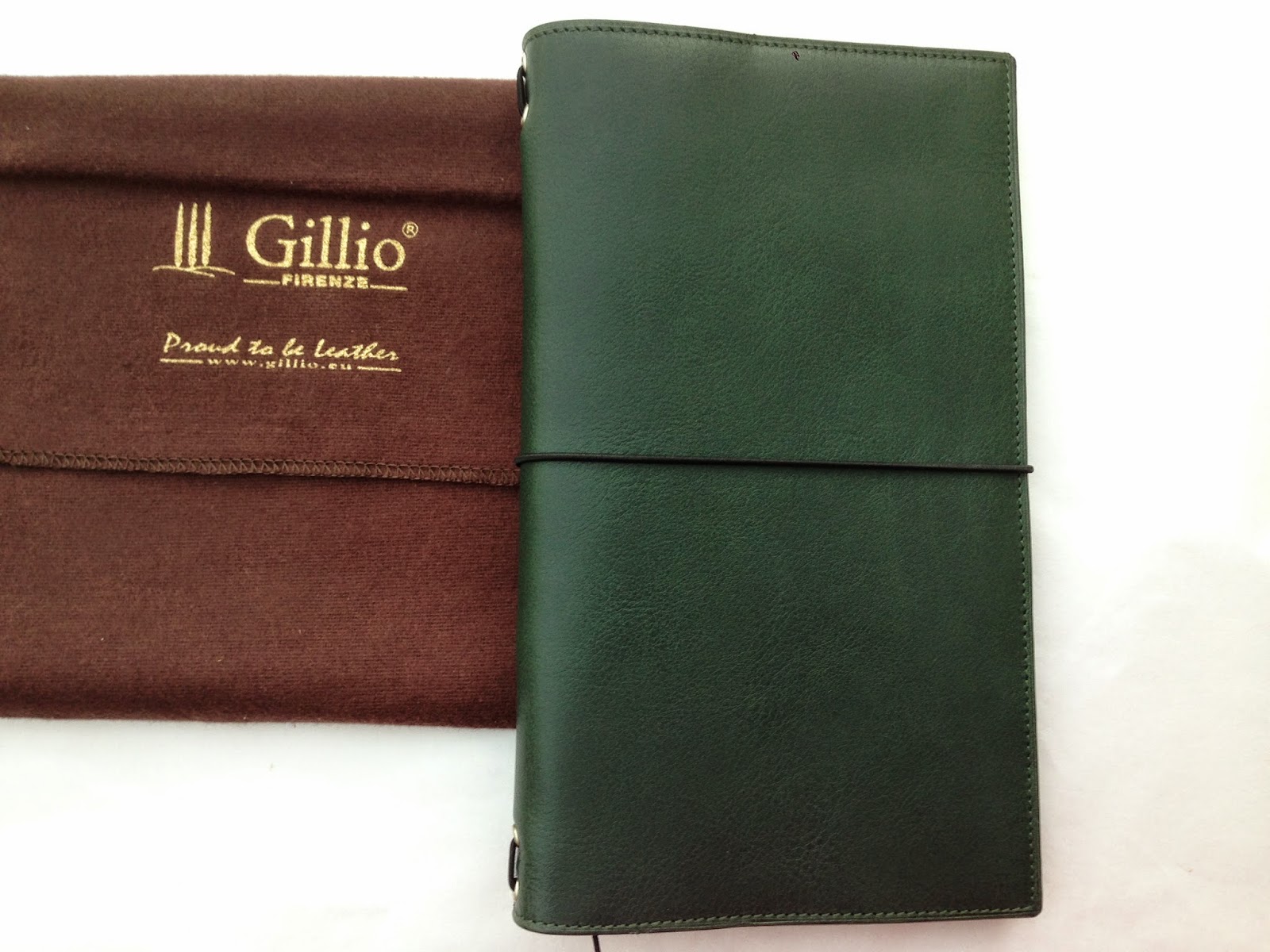 Gillio’s Giramondo (Italian for ‘Golbetrotter’) is a traveller’s-style notebook cover, but it isn’t like any I’ve seen before. I’ll mention the biggest difference first, to get it out of the way. The Giramondo costs €165 That’s about £130 at current rates, or a little over US$200. You can buy three to four traditional-style full-size covers – Midori or similar models – for the same price. So clearly this Globetrotter needs to be something special.

Long story short, it is. There are several details and enhancements that collectively justify Gillio’s price for the Giramondo. While we’re talking about price, let me disclose here that I didn’t pay it. Gillio gave me this product as a review copy. It’s a full production version, identical to the one you will receive if you decide to buy one of your own. This hasn’t influenced my opinion of the product, as far as I can tell. I have also had the opportunity to discuss the Giramondo with Tom Van Haelen of Gillio by phone to clarify a few design and production points. Similarly, I don’t believe this has compromised my independence.

So, what are these details and enhancements? It’s worth spending a moment on the leather. This is what Gillio is known for, of course, and the Giramondo boasts vegetable-tanned Tuscan epoca leather, in a choice of 6 colours (yes, that does include purple.) Delicately stitched and edge-finished, this is a robust but supple leather that is going to enjoy a very long life. Tom tells me that the new production contains a further three choices: burgundy, grey and pink. 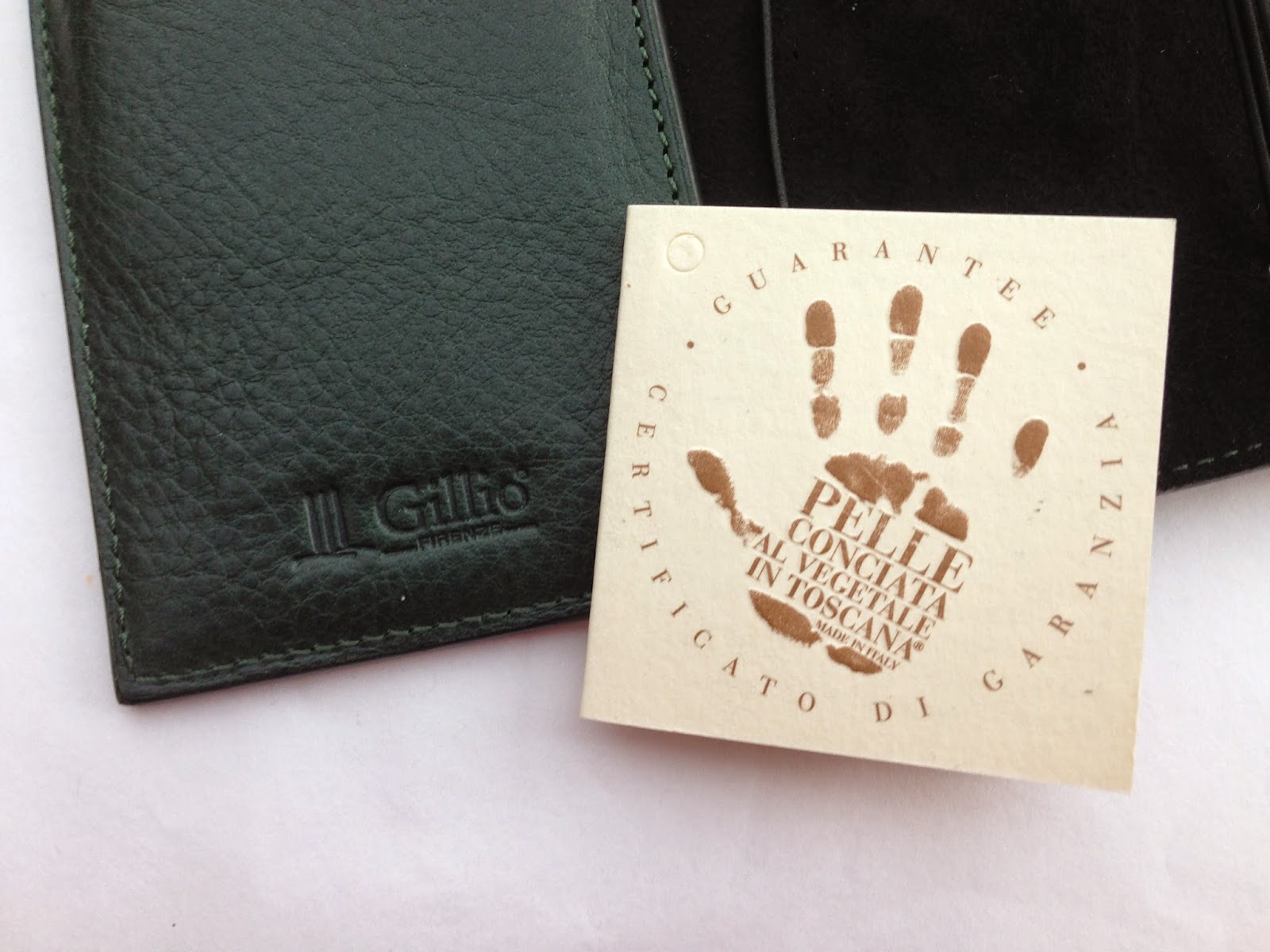 Opening it up, my first surprise was the lack of an insert booklet. I have plenty of those, of course, but a user buying this as their first traveller’s notebook would be disappointed to have to source a booklet separately (one isn’t available from Gillio, even as an additional purchase.) Tom knows this might prove an issue for buyers who are not already traveller’s notebook users, and there are plans to provide a booklet in due course and perhaps even market a range of different insert booklets. I put in one of my own full-size (210mm x 110mm) booklets. 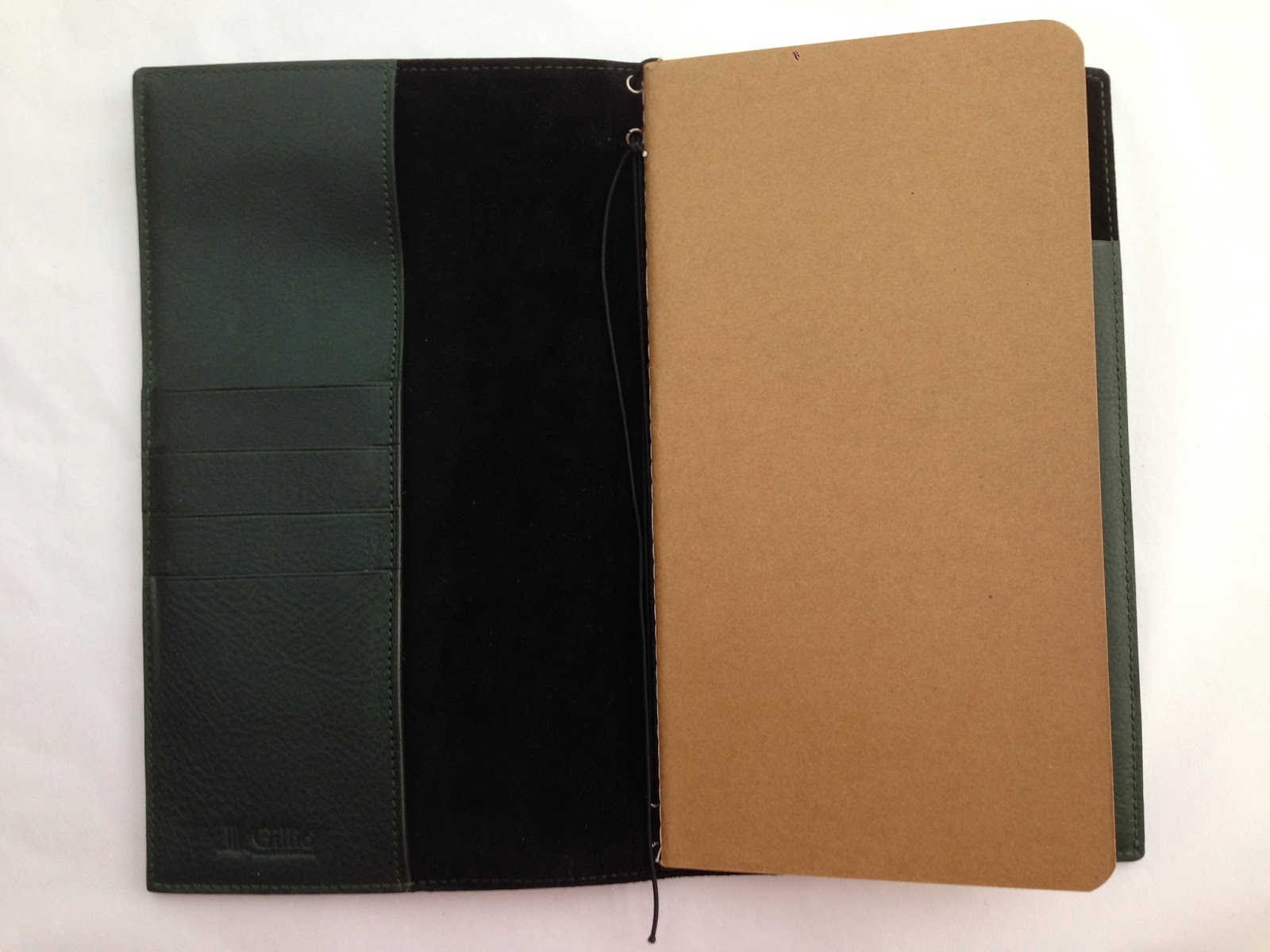 Later, I put in more, but that will come later.

Notice the long pocket on the left and the four credit card slots. Together with the secretarial pocket on the inside back cover, this lets the Giramondo double-up as a wallet or at least a travel documents organiser. This nicely solves the problems we all know that arise from the lack of inner pockets in traditional covers.

Another nice detail is the holes, which benefit from the addition of grommet reinforcements. As you can see, the holes are big enough to let you add further elastics and experiment with alternative stringing systems. 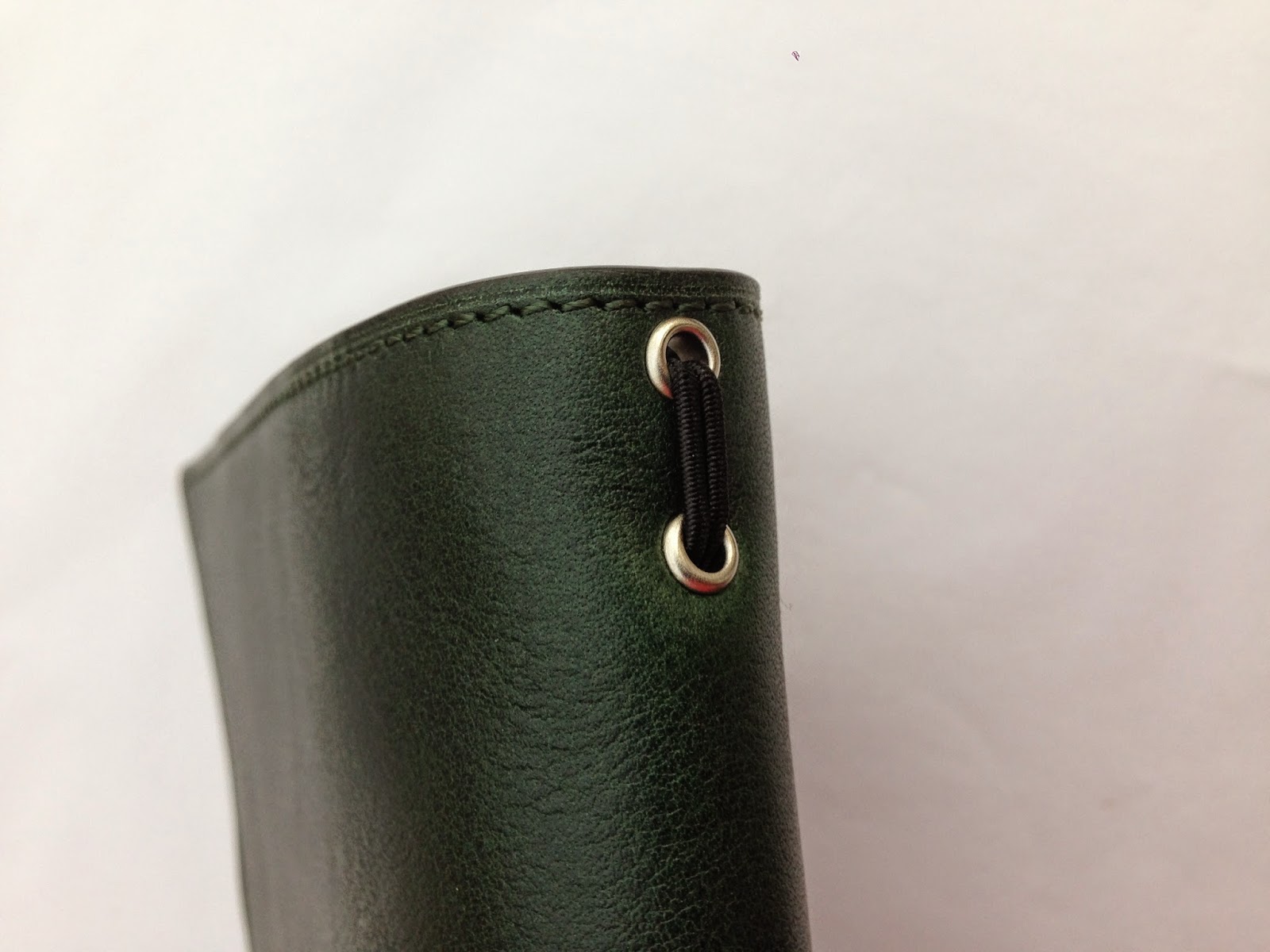 It looks from the photograph that there are two independent elastics in use as standard, but that’s not quite the full story. Here’s the inside view of the default stringing. 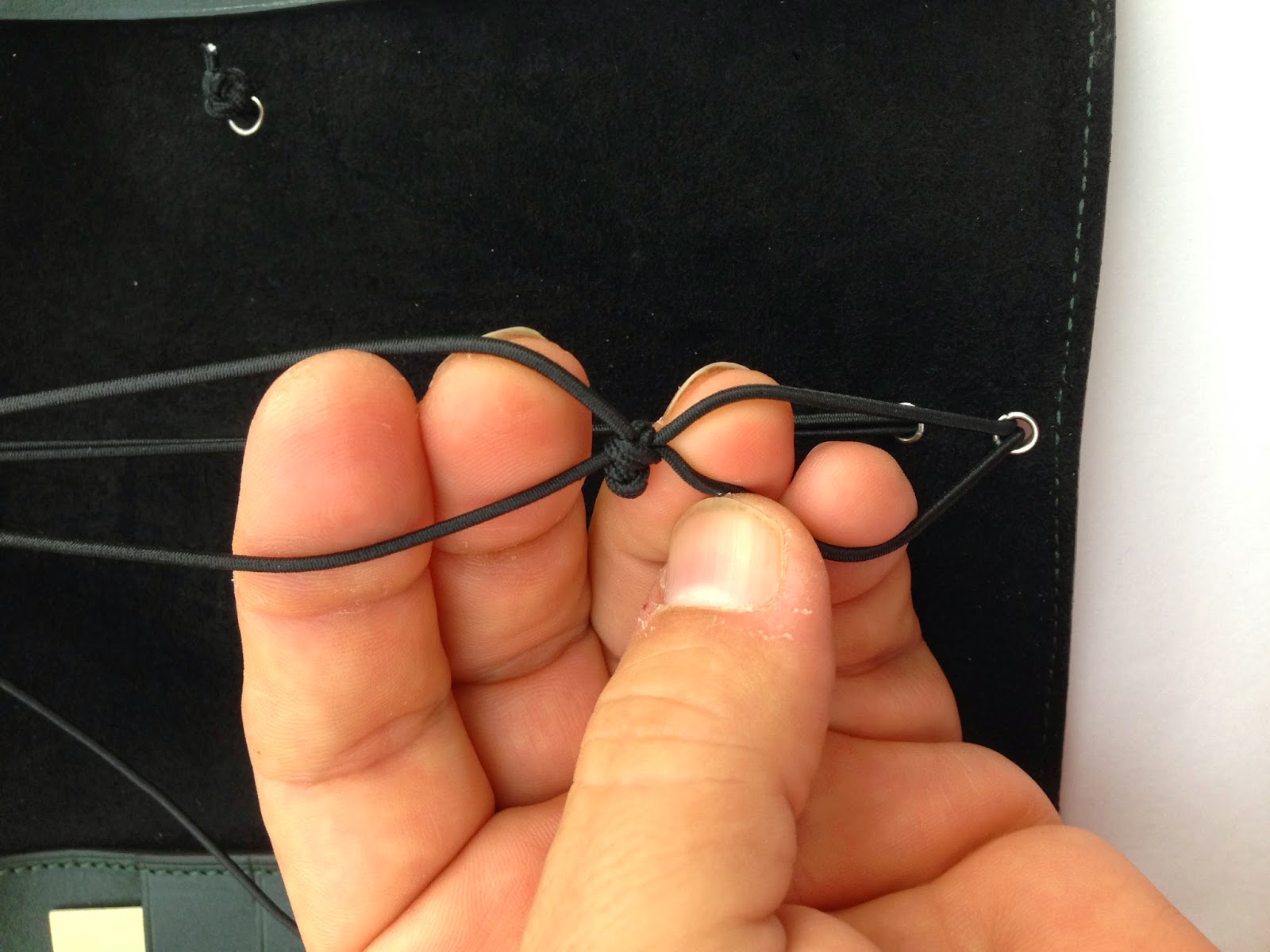 Notice the big knot in the middle of the longer sections? That knot means you can’t use the two elastics independently. You are going to want to restring this cover as soon as you get it. While you are at it, you’ll probably want to move the bookmark too, which by default is attached to the short elastic parts: 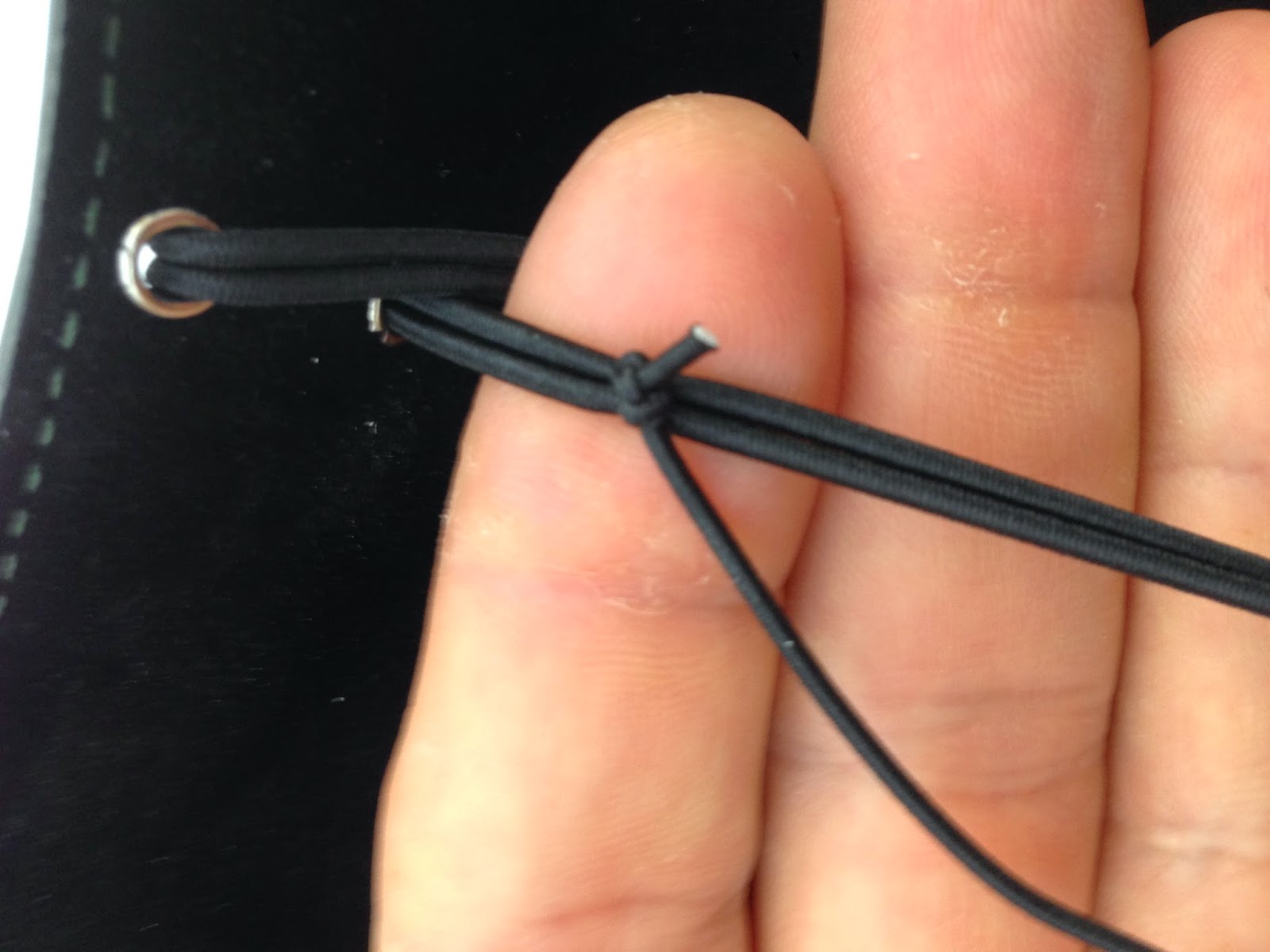 This placement means the bookmark string to be used has to go upwards to the top of the booklet, go over the top and then come back down on the inside. This might work if the bookmark string were long enough to do that and still protrude from the bottom of the booklet. It isn’t. Restringing is no big deal for most of us, but I feel the first-time user might get a little lost. I raised this with Tom and he’s aware that this wasn’t right in the initial production run. This will be fixed for the new production.

Let’s go back to the use of insert booklets. 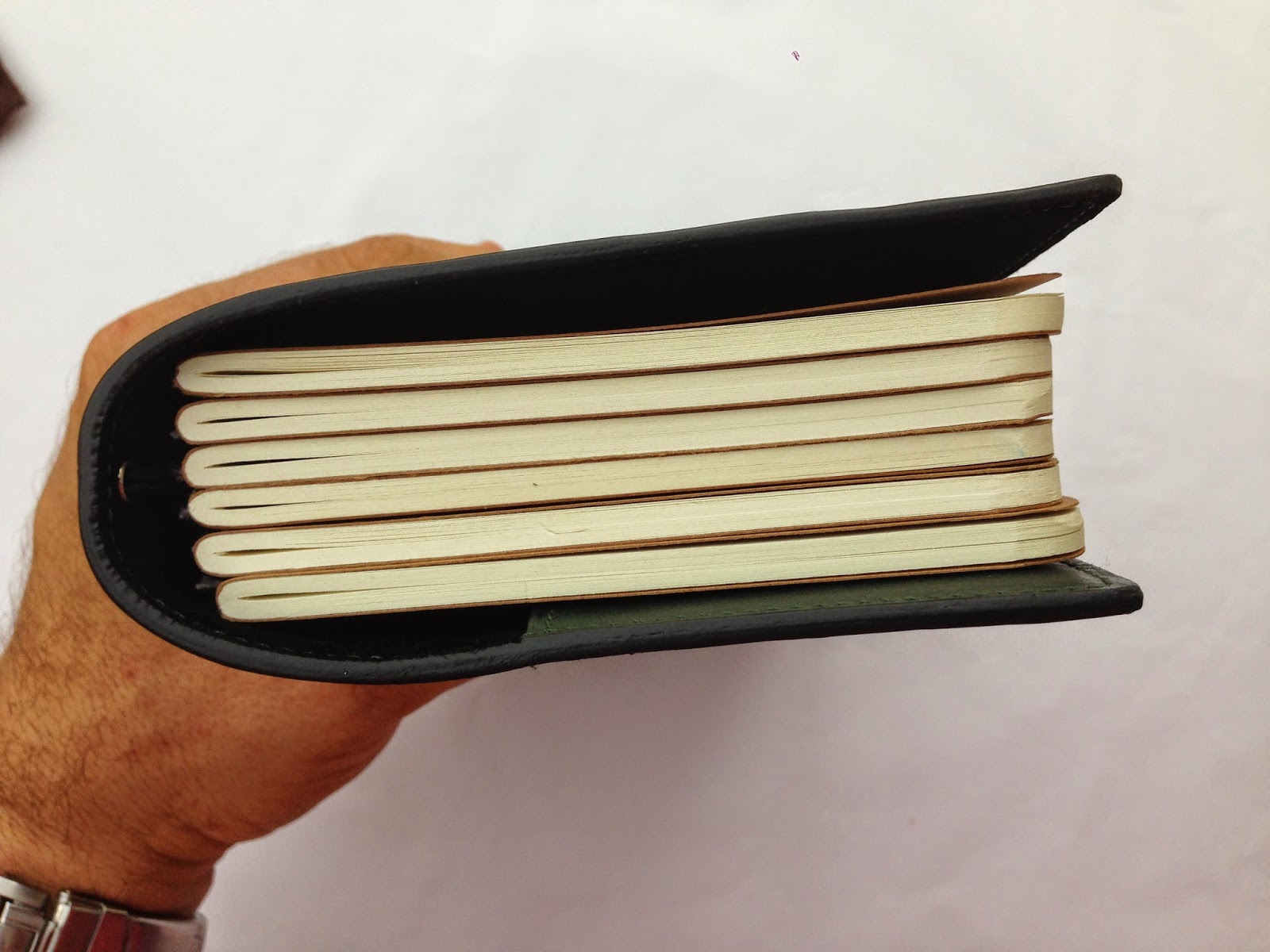 That is six booklets very comfortably accommodated without any protrusion from the cover. And notice that there’s plenty of scope for the spine to soften and increase the capacity even further. Gillio score highly here; I know from talking to traveller’s notebook users how much they value this extra capacity. At 27cm wide overall, the cover is quite close to being able to accommodate a large Moleskine cahier: 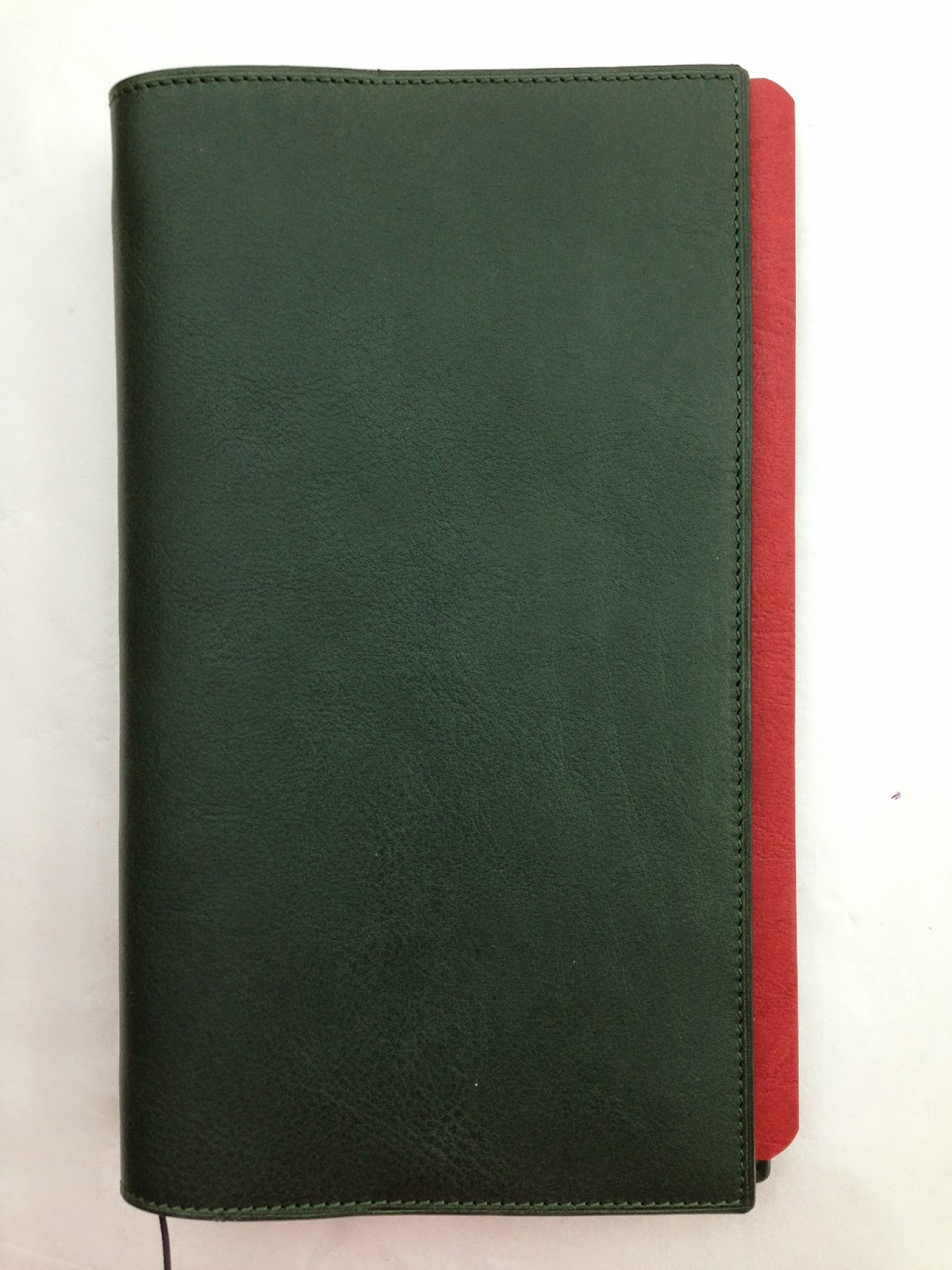 There is one final feature to examine, and this is perhaps the oddest one of all. This is the rear of the Giramondo when closed: 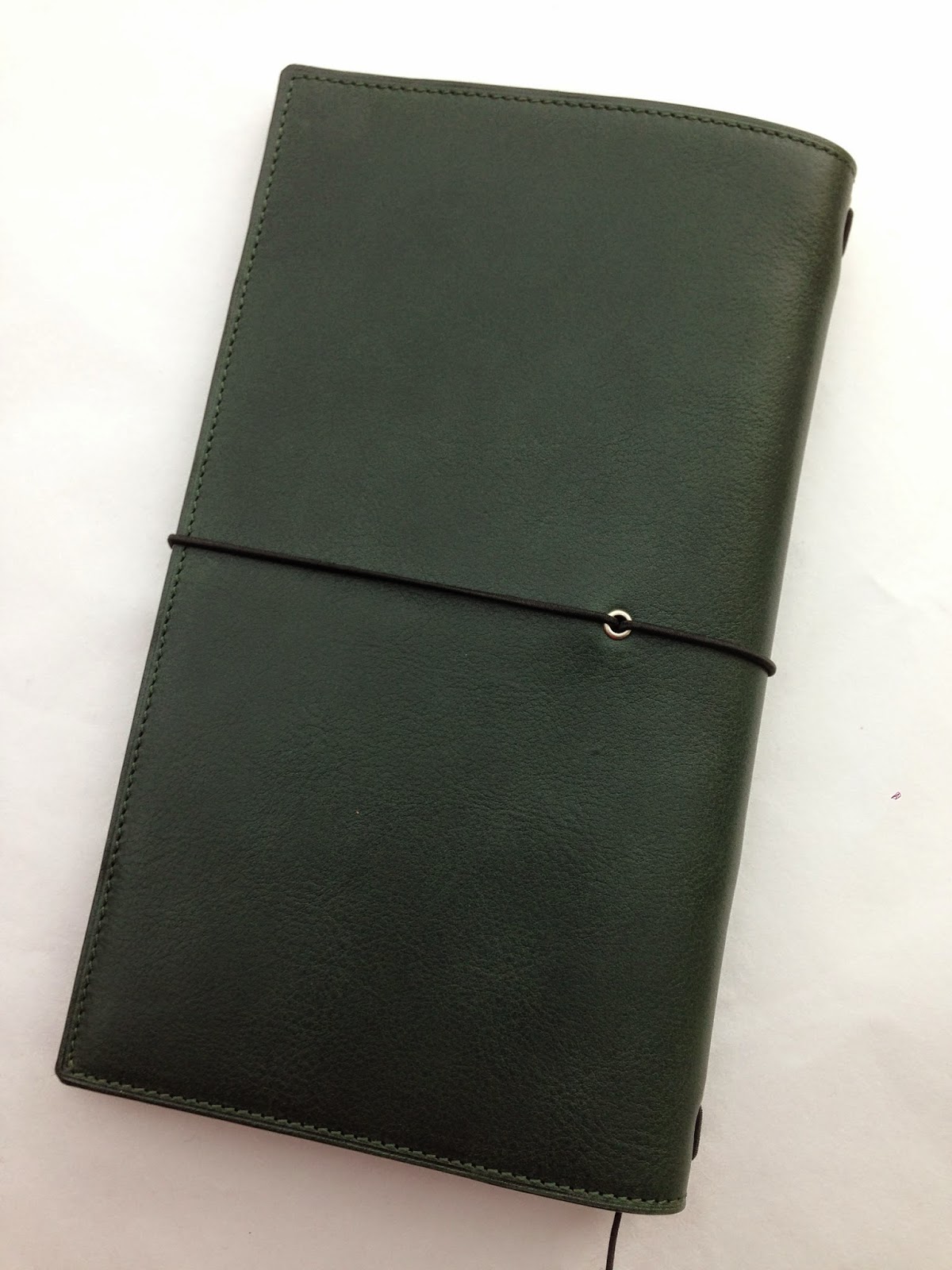 Notice that Gillio has considered the controversy as to whether the securing band should best emerge from the spine or from the centre rear of the cover and addressed the issue with a compromise! At first glance this is a compromise that will satisfy neither camp, but in use this turns out to be a pretty effective arrangement. The placement nearer to the spine makes opening and closing the cover feel just the same as a spine-anchored band, whilst leaving the spine unblemished by a central hole.

The problem with the Midori configuration, where the band emerges from the middle of the back was always that of writing in a booklet that sits atop a central knot. The Giramondo configuration, though, is much more comfortable. With the knot sitting nearer to the left-hand margin of right-hand pages, its influence doesn’t disturb writing across the whole page but just in a small region and even then only at the very back pages of a booklet. What looked at first like a clumsy compromise is actually a well-considered, innovative and effective feature.

During an afternoon with the Giramondo, I became rather besotted with it. It really is an exquisite piece of luxury leatherwork. But it has little to do with the traditional traveller’s notebook that I know and love. When I reflected on this, it made me think of jeeps and backpacks, travel essentials which have themselves been turned into luxury goods.

The gap-year canvas backpack is utilitarian. It can be thrown around, soaked, abused and will acquire a comfortable, distressed quality. But the chic, black leather backpack that carries your MacBook Pro and gets admiring glances in Starbucks has an entirely different aesthetic. You can drive a khaki Land Rover with its pre-war styling through the muddy valleys of South Wales or you can drive your climate-controlled Mercedes 4x4 along the smooth streets of Canary Wharf. Both have their attractions.

Should you own a Giramondo? Is it worth the money? The answers will depend entirely on your lifestyle and pursuits. For me, though, it’s a ‘yes’ and another ‘yes’.

I am giving away this review Giramondo, with Gillio’s permission. So if you like luxury leather goods and you’re cool with Green, you could be in luck. But time is short.

Here is what you need to do.

1. If you are not already a member, join the Midori Traveler’s Notebook Resources Facebook Group
2. In the group, find the post called “Giramondo Giveaway”
3. Simply add a comment to the post by the end of Tuesday, 21 October (midnight, GMT)

After the draw closes, one commenter will be chosen at random and will be the new owner of this lovely Giramondo. I will throw in a booklet or two as well. The draw is open to all, wherever you are in the world. I will cover the shipping costs.

Let’s say you don’t win. Or let’s say you don’t like green very much. Well then, perhaps you want to buy a Gillio Gramondo of your own. Gillio are giving providing us with a 10% discount on all orders made on their website between now and the end of next Sunday, 26 October. Those orders will ship from the new production, which is due to ship on 12 21 November and includes the three new colours.

To take advantage of this offer visit the order page
Posted by Ray Blake at 13:00