I recently made a flexible weekly and notes layout for the full size Midori. Today I am releasing the same layout in Moleskine Large Cahier size. 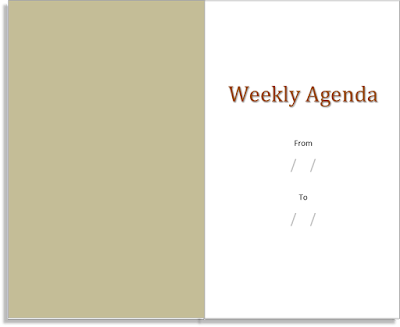 I have two versions of the inner pages. You can choose between the 'righty' and the 'lefty': 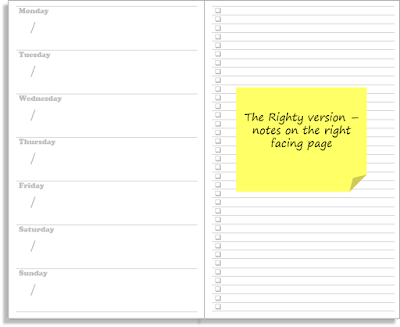 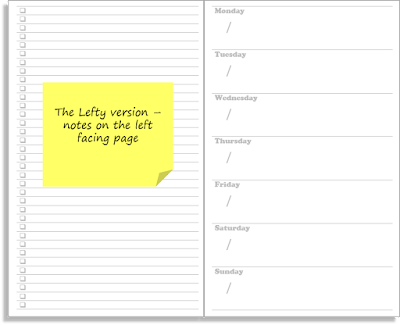 Although anyone can use either, I suspect that the 'righty' will work better for the right-handed writer and the 'lefty' for the left-hander. That is because diary entries tend to be short - a word or a phrase, say, whereas notes tend to require longer writing sessions, so the note section is on the relevant preferred facing page.

On the notes page, I've added action checkboxes on each line. Because these are unobtrusive, you can use the page either for tasks that you check off or just for general notes, ignoring the boxes. Or you can divide the page as you see fit and do both.

So, as I say, I think this will prove a flexible insert. You can download and print it for free. Links to the various versions are below.

What you'll download is a file that is ready to print straight away, without any need to use booklet format on your printer. Just print this straight to A4 or Letter paper, with duplex set to flip on the short edge (I'd recommend you print just one or two pages first to make sure your printer deals with this correctly and make adjustments as necessary.)

Once you've printed out the pages, you can bind them into a booklet and cut to size using these instructions:


Remember to trim these booklets to a width of 130mm rather than 110mm.

I'm going a little off topic today to share a project that's kept me busy for the last six months. To be honest, it's a bit of a vanity post, so you absolutely don't have to read to the end,

In July I turned 47. On a bit of a whim I spent some birthday money on a pair of running shoes and downloaded the 'Couch to 5k Plan' running app for my phone. I spent August following the plan. At first I was running for just 60 seconds at a time, my muscles, unused for decades, complaining at every step, my heart almost whirring in its acceleration and my lungs labouring to fuel the whole enterprise with what suddenly seemed like very thin air indeed.

Over the weeks, my runs lengthened until at the end of August this happened:

The Couch to 5k Plan promises to get you to 5k or 30 minutes. Because of my relatively slow running speed, I reached 30 minutes before I got to 5k. But the thought of running 5k continued to inspire me, so two days later...

That was the day I felt able to call myself a runner. In truth I became a little emotional when the voice in my ear announced, "Completed: five kilometres."

Even now I can hardly believe that ten days after my first 5k I ran my first 10k. It seems ridiculous.

Around this time, I joined Parkrun and started running timed 5k distances. This was my first experience of running with a group, which added a dimension. Until you run with other people it is possible to believe this is a private pursuit. Parkrun forced me (in a good way) to acknowledge and embrace the community aspect of running. 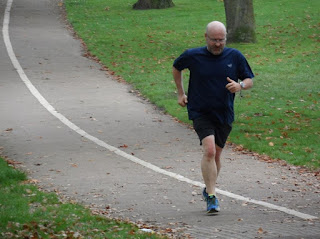 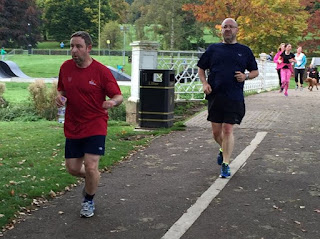 I kept going. I ran three times a week, concentrating on 5k runs with the odd 10k now and again. Before Christmas I booked my place on the Watford Half Marathon, which I ran yesterday.

Here we all are ready to get going: 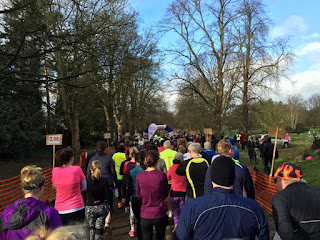 I was never going to set any records, but I hoped first that I would finish the race and that if I did that I could do it within two and a half hours, although I would happily have settled for three. In training I had never run farther than 17k, so I was making the assumption that I could maintain that pace for an additional 5k on the day.

Here is what happened: 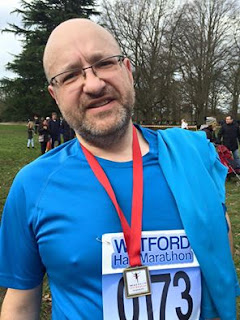 I can't really explain what this all means to me without getting a bit blubby, but I'll try. I've never been fit, Even at school I used any excuse to get out of games, I think that if I showed my medal to any younger version of me they would be incredulous. Indeed, I find it hard to believe myself.

And if I thought it was all down to me I would leave it there. But it took a team of people. There are my wife and children who have supported me in a thousand ways and were there yesterday at the finishing line. There are the marshals on the Watford route who didn't have to be so enthusiastic, so encouraging, but unfailingly were. There are the Watford residents who came out of their houses and clapped and called to us all as we ran past. There are the friends who sponsored me, who asked how it was going, who egged me on daily. There are the Parkrun volunteers and runners who made 'coming out' so easy. There were also the people walking by the canal last August who must have thought the sweaty, panting man running past them who stopped every minute was ridiculous but never gave any indication.  I owe all these people a very great deal.